As the insurance brokerage landscape changes daily, you need relevant insight to today's marketplace as seen through the eyes of MarshBerry's experts. Our commitment is to share our views and offer our expertise to help you make informed decisions. MarshBerry is here for you with as strong of a commitment as ever to help you navigate these complicated times. 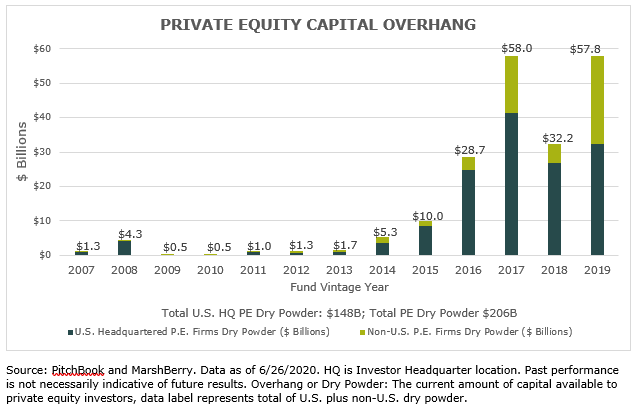 The state of the M&A marketplace

Over the hump. On the back nine. Turned a corner. All different ways to say we’ve officially crossed the midpoint of 2020 and we’re now in the second half of what has been an unusual year for most. So far, 2020 has thrown a lot of curveballs, so some may be glad to put this year in the rearview mirror.

This week, the focus is merger & acquisition (“M&A”) activity, and appetite, throughout the first half of the year.  But first, let’s understand where the market was coming into the year.

The chart illustrates the amount of capital that was raised in a particular year (“Vintage”) that had not been spent by the end of that Vintage year for PE firms that have a history of, or focus on, investing in the insurance marketplace. Exiting 2019, more than $32B in domestic funds were raised that year which had yet to been deployed. An additional $25 billion was undeployed from non-U.S. PE Funds, some of which invest into the domestic U.S. marketplace. Finally, in 2019, PE-backed insurance buyers were involved in more than 60% of the announced insurance distribution transactions.

It’s worth noting that the dry powder described in the graph is typically two steps removed from being used to fund an insurance distribution deal. The dollars above represent capital raised by a particular PE fund that would then in turn invest in a broker using those investment dollars. That PE-backed broker would then execute acquisitions using either free cash flow, investment dollars from the original PE fund investment, or debt financing raised in as part of PE’s original investment (or some combination of all three).

So, absent a global pandemic, high valuations and available capital had supported a strong start to M&A activity at the beginning of the year. What has transpired in the last several months in retail and specialty M&A?  We will cover this in more detail throughout the course of the week.

If you have questions about Today’s ViewPoint, or about activity in the M&A marketplace, please email or call Courtney Ferrara, Vice President, at 440.392.6586.

Subscribe to MarshBerry's Today's ViewPoint blog for the latest news and updates and follow us on social media.